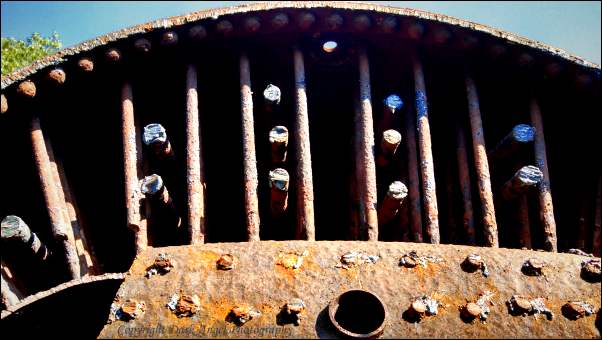 Are they gone? The Creepers I mean? Fuck that was close. Too close. Shit, they almost got me. Cold-blooded bastards. They’re most active in the sun, yet you ventured out in daylight. We can’t take any more chances; there are so few of us left now. At one time, we were many; powerful and dominant. Then the Creepers came. Their war with us was quick; brutal; unrelenting; genocidal. These old war machines, these rusted relics, once a source of pride in our dominance, now gravestones of a dying civilization. Grim reminders of what we were and of what we’ve become.

Delirium from the dehydration twisted his worst memory to the sweetest- the blood.  The fall into the abandoned coal pulverizer broke his back and legs, but the compound fracture in his left leg covered his face with blood.  Warm, wet blood.  What had once been nausea was now thirst and desperation.

Upside down, he raised the jagged piece of iron with his last bit of strength and plunged it into his gut, and salvation flowed with damnation.  He gulped savagely until something plugged the wound.  His fury turned to gluttony, for he had found something meaty to eat as well.

I hear footsteps approaching with a dull, heavy thud. Always the same footsteps. Big boots with steel capped heels. I squeeze further back into the black corner. I shun the light that streaks through the bars in a fan of gleaming dust. The footsteps stop. There’s a rustle of paper. He hurls it into my cell; a sandwich.  Always the same; a thin slice of processed meat between heavily buttered white bread. It lands in a puddle of dirty water. I never touch them but the rats do. They will come during the night, squeaking as they crawl through the bars.

The smelling salts brought him back to his situation and the clarity of the thing in front of him. His hands ached; pinned overhead with the dagger. His thick calf muscle screamed.  He was with the other woman, then…

“Rumor has it, you like to fuck. Me too.” His wife’s voice tittered as she stepped into the light. The thing’s steel finger bore down, tearing flesh from bone. Pain exploded in to him. He could see her in the gloom, licking her lips and laughing.

In the end, it wasn’t the agony, but her laughter escorting him to his death.

We tried everything but they kept coming. Nothing would drive them off except when Pa took to the fields. “Don’t play in the corn,” he’d say. We’d watch from the first-floor window, scythe bobbing, glinting in the light, scattering the birds like dark clouds into the sky.

When Pa died, there was no stopping them. We went hungry that year. The one afterwards we brought him back. Sticks and straw, all trussed up high, old scythe stitched to his paw. Now the birds are the least of our worries. “Don’t play in the corn,” he’d say. We keep well clear.

Of A New Age
Joseph A. Pinto

We are all as one, she said, and the great wheelwork spun behind her eyes.  It bore into me, that horrible flaking of rust, the anguished drumming of the mechanism she was, and still, I would have followed her anywhere.  Into the mouth of the machine, she said.  Yes, into the mouth of madness.  I cuffed my sleeves and exhaled, watching her shudder like an awakening beast as she gathered steam.  She was right.  We are all as one.  I closed my eyes and finally, surrendered.  Extending my hand, she took me, and shorn me as she had been shorn.

It churned along, belching foul, oily smoke into the already smothered atmosphere. Where it roamed, nothing was left; not animal, nor tree, or blade of grass – it consumed all. Nothing could withstand the creature’s path. Many generations had passed since we’d lived without fear of this demon; it was a constant in our world. We’d heard rumor of its approach, rumors we’d heard before; this one proved itself true. Crouched in our burrow, we watched in terror as the gnashing iron teeth approached. Just a few feet more – the end so very near. Call me coward, but I welcomed it.

Metal scrapes against metal, hastening the demise of the already deteriorating structure. From inside the darkened crevices they wake, ready to finish their job. Rust calls to them, sounding a dinner gong. Already, the transformation is happening. Not much of the infrastructure built by humans remains; not many of them remain. Chomp, chomp, chomp. Those who have eaten more than their share are now becoming the eaten. There is no place left for them to hide.

An unlucky one walks beneath the girder at the wrong time. The rust eaters have done their job. The flesh eaters now do theirs.

They’d done it for decades, maybe even centuries. Each full moon, the elders gathered the chosen and brought them to the pit. Eager and naïve, the chosen were led into the forest with hopes of a promising future, dreams of becoming one of the guardians to protect the clan from evil intruders who would dare take them from their home and destroy their way of life. However, true evil comes from within and the elders were pure evil, through and through. Once inside the pit, true intentions were revealed and the elders feasted on the pure innocence of the weak.

Massive machines moored in ancient soil, now unearthed to behold—such barbaric contraptions of whirring gears, sharp slicing appendages, and explosive, rotating turrets. Their victims’ screams and spilled blood now nothing more than faded memories and miniscule footnotes in historical annuals. Moving metal warriors left to rust. Their purpose of aligning world views and beliefs through slaughter, has been long forgotten. But, such effective devices they were! Nothing unifies like fear and power. These sleeping giants, abandoned in their finest hours, have endured. They lie silent… simply waiting for new marching orders. Well, I say, “Rise, and unify us again!”

Each piece of fiction is the copyright of its respective author
and may not be reproduced without prior consent. © Copyright 2015
Image © Copyright Dark Angel Photography. All Rights Reserved.