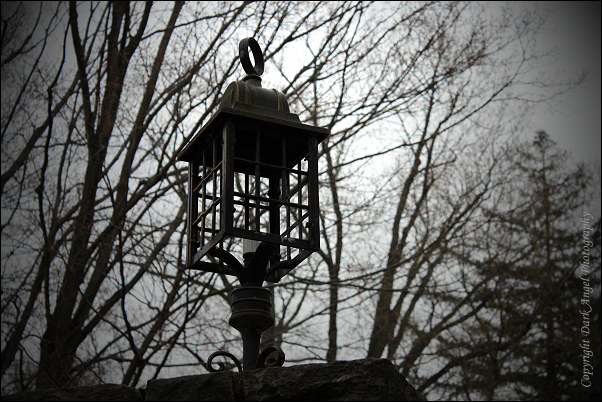 A Reason
Joseph A. Pinto

I found a reason to walk tween the folds of winter’s shawl, so hand in hand go we along Perdition’s Road. Shall we burn, we burn as one; shall we suffer, then know love cores the depths of our wounds. Lace your trembling fingers round my neck and your burdens I shall carry. I’ve no need to burn this lantern’s oils for our demons come well-known. Let them swirl in the dark, guttering til gone. Death is tenant of our path, yet tonight she’ll know no coin. My life I mortgage for yours; take flight now against my sky.

Torn and bloodied, she huddles against the lantern’s pedestal fighting for a life already lost. Broken in spirit, broken in heart, she watches as they circle, awaiting night’s fall. Not taken on the last, she knows this eve she’ll not be so lucky. Day is already beginning to dim; the heavens darken. Having sought solace in the flicker of a dying flame, the whispers in her mind reassure no salvation will be granted. Darker than the deepening hue of the foreboding sky, they watch. The lantern struggles to glow, then gutters out. Her hope vanquished, they descend. The feast begins.

It had gone midnight when I crossed the park but he was quite visible by the street lamp. Stick limbs. Wild hair. The sickly-sweet scent of honey. He was filthy and beautiful.

Upturned, his pale face bathed in the orange glow. I saw his tight lips, his dusty skin. His eyes were like two orbs of polished stone. I saw myself in them a thousand times over, growing larger as I approached.

He smiled as I swarmed in his eyes, this Monarch-Man, my Emperor. I smiled back. Together we danced around the street lamp, and the night whispered with wing-beats.

James glanced at the last gas lantern as they followed the old Haitian woman. Its light seemed to warn of coming darkness, fluttering and pointing away from the famed priestess. They had asked her for a taste of local voodoo, thinking it was bullshit until the old woman turned in the darkness of an alley and blew powder into their faces.

“Coupe poudre,” she whispered with a grin.

He pawed at his face until his legs buckled. Unable to move, James gazed with unblinking eyes as the voodoo priestess stooped close to his face.

“Welcome to New Orleans, my pet.”

It’s another gray winter evening, bereft of color, even the moonlight not distinct. And the light at the end of the old rock wall? Colorless. The sky blind to its presence.

The leaf-less trees pass his word through their twitching branches. He is pissed. Revenge is on his mind. Those who would destroy what he created must pay the price.

A giant pallet, held between his enormous hands, continues to draw all colors other than gray to it.

Armageddon will be much easier now. The lack of color already depresses them.

Great moans come from everywhere as the beasts attack.

“It’s the one right there”
“Where? I can barely see.”
“The one with the old gas lamp.”
The crowbar made quick work of the rusty mausoleum door. Bitter fall wind knifed through the opening.
“Help me with this.”
They chipped away at the cement covering, dumping the coffin on the floor.
“Shhh, you’ll wake the dead!”
They both tittered.
The coffin lid opened with an eerie squeal. The corpse looked like jerky, smelled rancid.
“You first.”
“Don’t mind if I do.”
He lowered his open maw on the corpse’s face.
Eaters of the Dead Society was not for the squeamish.

This city stands tall, desolate, and lifeless like the trees against the sunless sky. More empty concrete; more of the same. Nothing. Perched atop the corner on a forgotten wall, a lamp. Encased and protected by a small cage. The glass bulb intact, untouched by history. I imagine it glowing; a beacon of hope in dark and despair. Wait! What was that? Did it just… my God, it did! The filament lit up! I swear it flickered. Do it again! The bulb had blinked once… teasing me. Flicker again! Please do it again! Damn it, I need this. God, please…

Once a beacon of hope, the lanterns go unlit now. In a new world, where few things are guaranteed and only death is certain, he scours what remains of the charred earth for the precious few that have somehow survived the scorching heat, famine, and disease that has spread across the globe. They think they’re surviving, fools every one of them, but he’ll track them down; the ultimate hunter. When the demon and his ebony stallion finds them, they’ll wish they’d perished like the others. For the game has only one survivor and he rides atop a fleshless black beast.

I pace in the street light, my heels click a numbing tune. Many drive past, slowing down, hungry eyes gawking, but it’s just not their time.

The chosen one rolls up, engine humming. I get a blank stare when I smile and say “My service is free.”

His face drains of colour as it dawns. The irrevocable darkness is a rising tide within, a slow choking. I shriek excitedly as he passes over. My wings burst open, eager to deliver him. The judgement is always a feast of pain. Few are redeemed. Snatching his soul in my beak, I soar.

Under this post, he lay slumped against the cold stone wall; bleeding, appropriately ripped open. I watch the pain swell in his eyes and it widens my smile. I had not reason to smile in weeks—not since the woman I loved had been murdered in a savage manner. Despite her being of ill repute, I planned to marry. But on a night like tonight, with ring waiting in my pocket, I happened upon her torn body in the street. He took her from me. And now, I’ve taken him away from Whitechapel, ne’er to be seen in London again.

Each piece of fiction is the copyright of its respective author
and may not be reproduced without prior consent.
Image © Copyright Dark Angel Photography. All Rights Reserved.

Published by The Tale Weaver

View all posts by The Tale Weaver