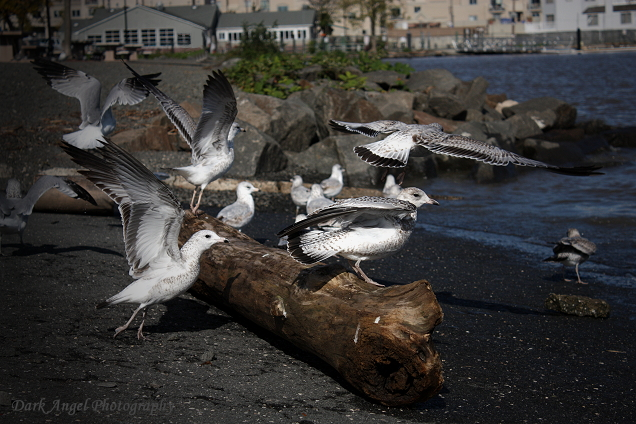 The carcass had washed up during the night, not far from the tourist hot spots. It was massive, stunk of rot, possibly a whale. We planned to investigate; maybe even identify it, once morning came. They beat us to it. Damn seagulls. Within a few short hours, they picked it clean. There wasn’t even a speck of flesh left. While a couple of them still peck absently at it, the majority flap their wings; jostling for position on the bone. They don’t seem satisfied. Their ravenous eyes look beyond us, just offshore at the children splashing a few meters out…

Once, I provided you shelter. Once, I held your world aloft. I am but part of the tidewrack now, splintered from my whole. You have found use for me; I am thankful for that much. A waystation for others to defecate upon.

Yes, you have found much use.

Leave me to the elements, to the rising chorus of jeers. I recognize I am your running joke. One day, perhaps, the beauty will be found within me. Until then, I await the rising tide. To be drawn away with the rest of the rubbish; to deeper seas; to grander isles.

He was God on his Virginia class submarine. Sailors frequently joked about the captain’s eccentricities, strange books, and old spear gun. Once out to sea, the poison killed them all quickly. 133 sailors sprawled across their watery tomb, the smell of wretch filled the tight quarters. He entered the command center shirtless, the Albatross tattoo breathing as evenly as he did, and pointed the spear gun at a temporary survivor. The sailor choked on frothy bile as he fumbled for the radio, but the spear gun spoke quickly. His blood flowed brightly as his eyes dimmed.

He’s not where he’s supposed to be.
Salt air crusts my hair. The sun so bright, it hurts my skin.
How long have I been wandering here?
No, not wandering. Searching. I know where I am. I know why I’m here. I have a purpose.
To find him.
He came to me upon a wave, a swollen offering from the churning brown sea. A secret I could share with no one.
For the merman was mine. Dazed, I hid my gift from prying eyes.
Gulls shriek. Gathering. Feeding. Fighting over…
My merman!
His eyes, his lips, his gills. All gone.

I wandered the beach often, waiving my metal detector from side to side, desperate to find something that could change my painfully dull existence. One fall morning, it happened. I found some valuables buried two feet down. They were still around the fingers of a murdered woman. The maw of her slit throat was packed with pinkish sand and tiny burrowing crabs. Yet, it didn’t disturb or discourage me. The sight of her fascinated me more than any girl before. I visited her often, digging each time with anticipation. She’s taught me a valuable lesson: don’t bury them, sink them.

Will sits on the driftwood watching creatures take flight, wishing he could join. I’m a man condemned to nothingness, he thinks. Death is fickle; too much time to suffer, not enough time to live.

As he runs his hand along the log’s surface sludge coats his palm. The viscous liquid moves of its own volition, traveling up his arm. Nerves alight as the slime penetrates his being, driving itself deep inside.

The ooze coalesces with Will’s skin; his body loses cohesion. The remaining gelatinous flesh seeps into the ancient wood, sustenance for the primordial hunger within.

Idyllic – it’s what people used to call this place. Now, the only thing to wash up on these black sand beaches are the dead; most parts of the dead anyway. The birds pick and choose the choicest morsels to feed on, leaving whats left to bloat and stink.

If only they would stay dead! Why do they have to get up and shamble across the beach anyway? Fucking rotting tourists is what they are.

The gulls cry out in shrill exuberance with each new visitor. Nobody living visits this beach any longer.

The birds don’t seem to mind, though.

The rise was good but the plummet was better. So close, almost close enough to spit in the white hot face of god, before radiating light seared my feathers, sending me spiraling downwards. The impact on water shattered every bone, my patchwork wings were torn. Blood seeped like a twisting lie, staining the ocean red. On the rocking waves I waited patiently for death to free me and lead me through the veil, far away from the cruel touch of the sun. On the shore they flutter and squawk, pleased and satisfied to watch me fall. Little do they know.

He stands alone on the beach, waiting for dusk. Behind him, St. Bees is quiet. The shrieks of the gulls fill his head, brush his skin, vibrate the jelly in his bones. Smiling, he cocks his head.

The dunes are empty but soon things will be better. Soon he will fly with the gulls. The rebirth is beginning. Already he feels the first feathers, prickling the underside of his skin.

They find him at dawn, washed up five miles down the coast. Cause of death: drowning. It takes three men to scatter the birds scavenging the flesh from his face.

The attack was imminent – we knew it would come from above, though many were lost to the beasts that swim the depths below. We fought with a ferocity that cannot be expressed in words; with the veracity of those who know the fate of an ecosphere rests upon their deeds. Man, ever ignorant of our struggle, watched feebly as destruction swiftly approached on wings far less pallid than our own. Our crusade failed.

Most are gone now. Those who can, rally to take flight one final time. We hold no hope of triumph; only a seething fury for unbridled vengeance.

Each piece of fiction is the copyright of its respective author
and may not be reproduced without prior consent. © Copyright 2016
Image © Copyright Dark Angel Photography. All Rights Reserved.