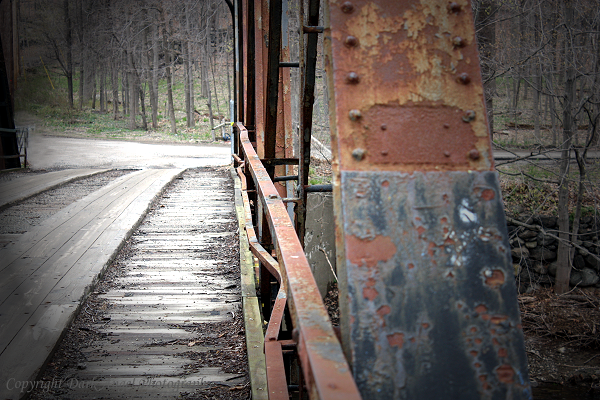 Every October we relive the nightmare. The townsfolk march my three sisters and I to Judgment Bridge. Our hands bound behind our backs, we stand facing the fates of sinners. The angry mob chants, “Suffer the wicked!” Jabbing pitchforks force us to climb onto the rusted railing. Looking down, my sisters and I teeter over roaring river rapids. The hangman places nooses around our necks. Before he reaches Charlotte, she jumps and plunges into the rushing waters. Beside me, Gwen and Sylvie cry. We hold hands as we leap. The ropes snap our necks. We hang forever beside our parents.

Legends spoken in elder tongues told of the barrier. The forbidden land existed beyond. Kell desired secrets, discoveries, things unknown. To touch, feel, see…he’d return a hero. They’d sing of his journey for ages. Knowledge of the world gone would be his to tell. Whatever horrors lied ahead, he’d conquer. He inched with fear over rushing water. But his legs weakened as he reached the midpoint; body thinned, skin withered. The air smelled of death. He tried to withdraw but the barrier obstructed return. A throaty howl escaped unheard, as ravenous beasts of ebon flesh appeared from behind the trees…

I place my hands on the bridge and lay down, nestling my head into the rounded gap of steel.

There’s only one of us in the family each generation and as is tradition, I don’t know who follows me. My time is over and only they choose whether to reveal themselves. I will be their first hit as my uncle was mine.

“Thank you,” says a sweet female voice, one I’ve known since she was born. “Your place of honor awaits.”

In the silent morning the click of the safety sounds as loud as the gunshot that will soon follow.

Rusted girders ached under her weight. Centuries passed since anyone ventured out on that bridge. The deepest spot was nearly the length across to the other side; the free side.

She struggled, just a few hundred feet from where she could be safe from all the torment and ridicule. It wouldn’t be long before she could get away from the prying eyes always staring, the disdain she’d had to endure for years.

As she reached that spot, the one you couldn’t see from the deck, she dropped his mostly dead body in without so much as a single glance down.

Each time I cross cold shivers overcome me. Here you leapt into the brown waters below, your body never found. With toes curling the edge I imagine the impact, the smack against the rippling surface, hard and sharp like plunging into glass. Water is a cruel and hungry force, capable of painfully wringing the very last gasp of air from tired lungs. I strain my ears against the rush and gurgle of the river, listening, waiting, sometimes your voice rises like a dark bubble from the muddy depths. It breaks before I can make out what you want to say.

Where will you go, Josie May?
John Potts Jr

Back in ’63 the widow Josie May lost her two boys to napalm. Her grief was persistent, heavy. One evening Josie plunged head-first to the shallow creek below Mason Bridge. She suffered a death worse than her sons and the locals coined that spot Widow’s Sorrow ever since.

Those who shared Josie’s pain found a similar fate; some took the dive, some didn’t. But the town never mentioned that when they shut the bridge down for good. Old Josie though, she’s clinging on, and the kids nowadays say Widow’s Sorrow isn’t half as scary as it was made to be.

You’re holding that razor, comforting and warm. Everything will be better on the other side. Trust me. The pain and anguish you feel now will be but a memory. Don’t you see? Your life’s journey has brought you here. All that is left now is to cross over, the final hurdle represented by this bridge. There is but a simple toll. Just cut deep. That’s all you have to do. Don’t be alarmed by what’s on the other side. It will look bleak only if you want it to. There’s much more so embrace the razor’s cold bite and cross…

From beneath the bridge, I hear the breaths; a horrid rasping, laden with congestion and rage. Warned I was not to cross this way for what awaits, the rumors told, was of no natural origin.  The sun slowly withdraws from the land as the breaths rise and fall, everywhere and nowhere at once.

Turtle-like, my head withdraws deep into the hollow of my overcoat, bones rattling within my shell.  I should have taken heed, but like all else in my life, it is too late.

Yes, I hear the breaths from a beast awakened, rising and falling with my own.

The deputy stared at the human-shaped soot stain indelibly smeared into the surface of the rusted bridge. Nearby lay a ratty wallet. “Another one, Clem?”

The sheriff snorted. “Of course, Willie. Full moon last night. Another fool got an eternal ticket on our Ghost Train. It’s a spectral menace. Even ripping up the tracks in ’56 didn’t help.” He bent and examined the wallet. “Shit. It’s Darren’s. You’d think he’d know better.”

He got what he deserved. Best sound in the world listening to him scream over that phantom train whistle.

Mother’s milk spills upon all. The transformation– beautiful; horrifically brutal. As she nourishes, she destroys. Silvering, drying, cupping with the wick of her dew.  Molecular bonds shift as she bathes all with rage and gentle tears from above. She corrodes, taints; amends. The surface awash in pained agony transforms to a visage her eye finds most appealing. Underneath, sweet symphony of destruction plays to a finely tuned ear. Warping, twisting, undulating; becoming. Corrosion, chaos, lack of conformity brings justice to the wracked and malformed. Her torrent soothes the hardest with passage of time; her gentle stroke cripples that unnaturally wrought.

Each piece of fiction is the copyright of its respective author
and may not be reproduced without prior consent. © Copyright 2017
Image © Copyright Dark Angel Photography. All Rights Reserved.