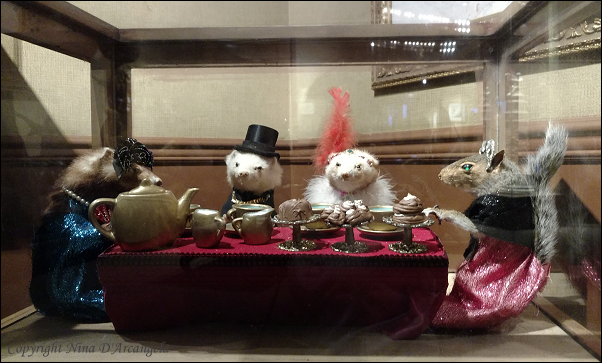 Worthy of Heart
Lee A. Forman

Preserve their milky flesh; make bare soft, pink innards. Harvest remains, cover them in garnish, make beauty of woeful frames. Consume the fetal home—the birthing apparatus—for it is not lasting. But the tiny, wriggling creatures, perfect for trimming. They grow with skill, become things that made them. They pose for desire, malleable to intention. To play with life and death, their brittle models, is to be a god with artful power. Divine imagination is the finest tool. To make rich and vibrant something dull, paint life onto spilled passing.

Beautiful as the collection stands, it is but practice. Want of larger work—a showpiece worthy of burning hearts—fuels stimulus with copious motivation. The hunt must seek substantial result. Perhaps, something less of nature. A fine canvas, tall and supple. The grand puppet of evolution. Two masters of the Earth, to be my servants. They’ll birth the final piece, to be emptied of mortality, and filled with tender love of my pursuit.

I loved my secret hobby. Some could call it macabre, this taxidermy, but I saw it as repurposing dead things by turning them into art. My latest project was my best yet:  a ferret and squirrel tea party. I had trouble getting the ferrets at first, but I worked it out. And today I’d just tightened the last screw in the glass case.
“Hey, Jay. How are those ferrets doing?”
I whirled at the voice. Dave from the pet store stood by the open garage door.
“Hey, what’s that?” Dave stepped forward and saw my new tableau. He went ballistic. “What the hell did you do to those ferrets?” He grabbed me. “You little shit! That’s animal cruelty! I’m calling the cops!”
Staring at his angry face, hearing his threats, something just snapped. Panicked, I plunged my screwdriver into Dave’s throat. He grabbed at his neck, gurgled blood and collapsed. I stood trembling, afraid, but…
I kept gawking at Dave’s pooling blood. It stirred new ideas in my brain for a spectacular scene. I glanced over at the bloody screwdriver sticking in Dave’s neck and suddenly smiled.
I just needed a few more people to make it work…

After one year of living in the box, he let her out into the cellar. After nearly two, he let her have a needle, only under his watch, of course, and she would stitch up the furry little corpses he would bring her. If you take the insides out and replace them with sawdust or small rocks, they won’t smell. It took her a long time to discover this, but after she did, her companions were more enjoyable.

“This one is Mama,” she whispered. “This is Papa. This is June.” Mama, Papa, and June were cherished. Snuggled. Held tight in the dark.

“Why don’t you name one after me?” he asked. His sweat smelled worse than the animal’s decay. His hands were heavy and did unspeakable things.

She refused to name the last toy, calling it Not-Mama or Not-Papa or Not-June. It sat alone by the bowl she used for a toilet. She made sure it was missing its eyes.

How Is the Tea
Jon Olson

Don’t you love tea parties, my dear? I do, although I didn’t like using dolls so I settled on animals. I had Mr. and Mrs. Mouse, Mr. Ferret and the sweet Miss Squirrel. They always bit me or tried to escape. I killed them. With no will of their own, Mr. and Mrs. Mouse could entertain their guests for days on end. How is the tea? Oh, just lovely! They would rot after a while, smelling awful so I’d switch them up with fresh ones. Did you know I tried people once? It was horrible. They screamed and didn’t even want to play. Imagine! Before serving a single cup, I slit their throats. Besides, I missed Mr. Mouse’s gruff laugh and Miss Squirrel’s squeaky coughs. And now they’re with me here in the hospital. I get to visit them every day. Even the lunatics swing by to see them. More tea, old chap? Why certainly, sir!

“Daddy!” I turned to see my little girl, her cheeks roughed, a white rat proffered in her outstretched hands; blood dripped from its stilled nose. “Fix it, Daddy, hurry!” I took the slight offering to my workbench. She watched with rapt fascination as I opened, then gutted the animal. Once the hide was cleaned, I applied a preserving agent. Days later, we stuffed the husk; she chose the position, I sewed its remains. Poised on a miniature chair, she whisked the creature away. The following week, a squirrel accompanied the same desperate plea; again I administered, again she observed. After the fourth, she begged a box to house them for afternoon biscuits and tea. I indulged.

She became reclusive soon after, choosing to spend volumes of time in her attic playroom. Concerned, I climbed the stairs to her private sanctum one afternoon. I swung the door wide–the fetid stench nearly overwhelmed me. There, on the floor, sat my little girl amongst a menagerie of mutilated creatures, including her beloved pet cat; a bird crudely stitched into its open maw. She smiled, clapped with sticky fingers, and giggled. “Look, Daddy, I fixed them, just like you.”

Every stitch. Every tuft of fur.

It’s perfect. Unlike the world. My views on humanity evolved as my project progressed. My coworkers joked about what I was doing because they didn’t understand. It hurt, but I kept going. They flitted about their lives, unfocused, I continued to center myself. I started crouching over my creation night after night. Soon, all I had left was work… and this. I work so I can create. And now I am done. Alone with perfection.

When you truly give all, nothing remains. This is my all. I want nothing more from this world, nothing from the lost people who drift about until they wither away. When they find my art they will understand my patience and attention to detail.

I sit at the reception desk, decisive-sounding clacks filling my ears as I tap the last few keystrokes. Only I could pull this off. Computers are wonderful, if you know how to manipulate them.

Within moments, doors lock, cell phone signals jam, and gas pours from vents. We die as we live. I smile, watching my coworkers’ panicked final seconds. Calm, I take my last breath. Perfection.

Guest or Demon
Christopher A. Liccardi

They looked like fucking rodents. They died how they lived; like a pack of biting, gnashing vermin. Each one poised and refined. But, lift the glass and you’d be gob smacked with the stench of decay and putrescence that will never leave you.

Each had done me a bad turn so they had to pay.

No. Not for a moment could you think this elaborate scene was crafted with such feeble petty intent. That game, I left to the jilted lovers and business partners not savvy enough to see their other half beat them to the punch. My motivation was societal, selfless. Each played a part in my loss of her. Each took something away that I was, so each had to be outsmarted, out-gunned or out maneuvered.

She is gone now and will never return, but I have these four elegant guests over for tea and I will hate them no less as the decades creep past and the lust turns bitter.

At least I have these demons for company as I slowly rot alone.

When I see my inheritance, my jaw drops. Four taxidermied animals in a glass display case: three ferrets and a squirrel. They wear scraps of velvet and silk, sitting around a table piled with miniature pastries and a tea set. One ferret wears a top hat at a jaunty angle; another mouths a doll’s pearl necklace. Nana’s sticky note, taped to the glass, reads For Rachel and her sisters, together forever. I swear under my breath. Nana had been sick, but not demented. She knew my sisters were gone, and this is what she left me?

I lift the lid, the stench of mothballs wafting up. Dizzy, fumbling with the glass case, I turn around blindly and smack the wall. My vision blanks out. When it clears, my tail is being squashed against my chairback. I don’t remember having a tail.

I recognize them, those three pointed faces. Sarah teethes her pearls. Lana grins from beneath the top hat. Reilly’s still, but beneath her feathered headband, her eyes gleam. Rachel, each says through a stiff, pointed smile, sister, you made it, you found us.

Me and my sisters, together forever. I want to scream, but I can’t open my mouth.

The Time Out Box
Lydia Prime

They were being mean and I didn’t want to listen anymore. Mommy said that if I invited them over things would change and we could be friends. Mommy’s never been seven years old, obviously. I tried to show them my real friends. The ones who were never mean to me, but those girls said I was weird. One of them even started crying! I didn’t understand! How could they not be immediately drawn in by the tea party my fuzzy little friends were having?

I cried alone for a while, my insides began to burn. I heard them whispering. They were saying awful things about me, the whispering grew louder and my head started to hurt. I just wished I could put them all in time out. Then the voices stopped. I heard four echoing thumps, and walked to my room. They laid seemingly lifeless about the floor. I looked to my fuzzy friends and saw that their eyes had changed, no longer empty. I could see the mean girls reflected back against them, my wish came true. Time out for bad girls.

Wrapped in an old sheet was the diorama Grandma made for my graduation. Gary saw only a piece of junk and beelined for the trash but somewhere along the way he stopped, turned to me, and performed this…this un-Gary-like act of love: he asked me if I wanted to hang on to it. I smiled and nodded. He playfully teased back. I could tell that Gary was drunk. So was I. Maybe that’s why I spilled the truth.

“I told you that Grandam loved serial killers, right? Well, that’s because she was one. And she never let anyone bully me. Grandma lured my high school bullies—those fuckers—into her basement and kept them locked there, alive, for days. She tortured them hour after hour until chopping them into bits small enough for the birds to devour. Chloe really did have turquoise eyes, too. I wanted to keep her hair and her lips and her eyes—especially those eyes! Of course Grandma wouldn’t let me so she gave me this diorama instead; something special to remember her by,” I took his hands and smiled. “That’s why I can’t part with it, Gary.”

Each piece of fiction is the copyright of its respective author
and may not be reproduced without prior consent. © Copyright 2018